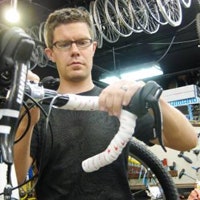 I’m told we can blame the record number of “trainer miles” ridden this year on the Greenland Block. I’m about ready to fly up there, kick some Viking ass, and get that thing moving. In the meantime, here’s another hour of cycling conversation to divert your attention while you ride the “bike to nowhere”.

First up is an interview with Gillian Klempner Willman, who directed and produced a new film entitled The New Woman. It’s a documentary about Annie Londonderry’s journey around the world on her bicycle in 1894. The New Woman will be screening locally in April as part of the Cleveland International Film Festival.

For about 120 years, one constant about the bicycle has been the chain. We love them, we hate them, we lube them, but (so far) we haven’t been able to live without them. The Gates Company is attempting to change that with their Gates Carbon Drive. Joining us this week is Paul Tolme, Brand Evangelist for Gates to enlighten us on what it is, how it works, and why you might want one.

Rounding out the show this week is a look into one of the biggest bike race/festivals in the country: The Sea Otter Classic, which is coming up in mid-April in Monterey, California. We’ll hear from Jeff Frost, who is the Sea Otter Athletic Director about what’s happening in addition to bike racing at this year’s event.